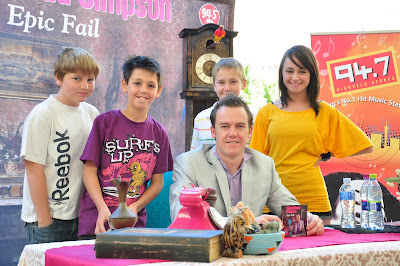 I was sure Liam would hear it on the radio this past week, but he didn’t.  So, much to my delight, he had no idea that Whackhead Simpson was signing his latest prankster CD’s at The Glen this morning.  I told the kids to be ready by 9:15 this morning.  We headed to The Glen and I allowed the boys to go off and do some trawling with instructions to meet me at the Food Court by 9:45.
Courts and I headed to CNA and got the CD and as we were leaving I got a call from Liam all excited telling me that Whackhead was going to be there.  I am surprised that he didn’t put the two together … I actually choked up when he told me … when I saw him, I called him over and gave him the CD and then got in line.  We waited a little while and when Whacked arrived, Liam’s face lit up totally.  He was really excited.
Whackhead took some getting used to when he took over the morning show, but I really enjoy him most mornings.  He’s full of funnies and laughter and comes across as a really genuine person.
An early Christmas gift I hope my lil boy appreciates.