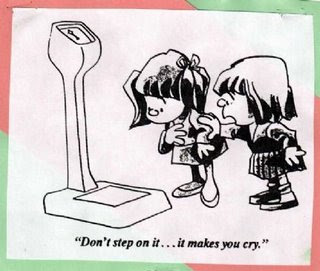 Well … I got on anyway this morning and it almost did  make me cry, but I have been weighing myself regularly, so it wasn’t a big shock.  The only difference is that I weigh myself first thing in the morning in my birth suit, whereas this morning I was weighed with my clothing on – maybe I’m just mentioning this to make myself feel better?  But today, almost two years later and months of telling myself I should get back on the bandwagon, I went back to Weigh-Less.

Another motivator is that I earn Vitality points as well and I’m almost at the next level where I earn more discounts at Clicks and Dischem.
After the weigh in, I headed to gym and hit the treadmill for a good 15 minutes fatburn session of the treadmill.  As I was leaving, the owner of the gym pointed me to the work out room – oh no way sir, but he did ask if I’ve ever had an assessment and I don’t remember doing it, but he convinced me to book in for one on Friday morning – and no coffee beforehand … yikes.

My first meal on the new plan was my breakfast which was 100ml low fat yoghurt and 25g of Weigh-less Fruit Muesli.

So, now that the worst part of the day is over – let me ask you, how’s your day going?