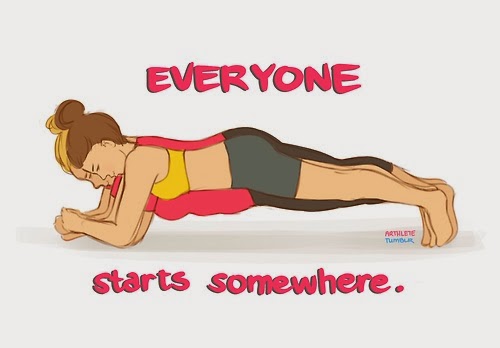 So yesterday morning I really was flat – Schatz had gone out on a CPF patrol at 2am and from there I slept very restlessly and then around 4am the dogs in and around our street, including out own, were barking like crazy and he told me they had been chasing a house burglar.

You can guess then, I did not go to gym in the morning.  I decided to join the boys when they went in the evening and all I could manage was 15 minutes on the treadmill.  I’m not quite sure why I’m feeling a little flat in my joints, but I really felt unable to push it.  Its still more than I was doing a year ago and as the image above says, “Everyone starts somewhere”!

So this morning I got up, took the boys to school and then thought, hmmm lets check out Cassys’ Blogilates which I found over the weekend and was watching some of on Sunday morning.  I decided to try POP Pilates for Beginners: Ab Time!   I also did some arms exercises with my dumbells.

Oh my oh my – did I battle to get through this workout – and what it tells me is, I need to get a lot more real about it if I want to get rid of this tummy.  My sister Norma mentioned doing a Pilates class at her gym and how it had whacked her, so I was inspired to say the least to give it a try.

I could not do the entire workout and the weird thing, my joints were creaking … lol … not sure what that’s all about but there were distinct clacks as I started and my abs are feeling a little worked as I sit here.

Have a healthy day now.