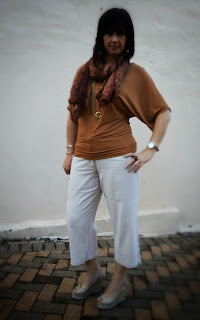 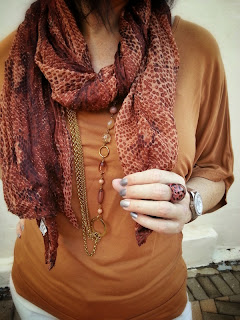 This morning I decided that since my guys are going to site, I’d dress a little casual.  I choose my linen capris (Meltz) and the batwing-ish t-shirt (Legend @ Makro) and the scarf that my sister Lynn gave me as part of my Christmas present (Pick ‘n Pay) and my trust nude wedges (ShoeCity) and my necklace that Taryn gifts me and for the life of me I can’t remember where its from, but Charlie something rings a bell (its from State side) so please forgive me.  My watch is a Christmas gift to myself last December and its a Fossil and the ring came from a little tourist store in Graskop and was bought for me by Schatz last year.
We had the most awe inspiring storm last night.  When I was brushing my teeth, lighting came crackling through the sky and as I looked out the window down onto the Klipriver Drive and Bellairs intersection, it hit the lights and that led to sparks flying all over and the traffic lights then went dead.  It was scary and makes your heart beat faster … poor little Marshy was rather flustered and Tequila was panting heavily and underfoot as she gets highly stressed with storms and fireworks.
Schatz said he was woken a few times after that by the power going out … lucky for me, I slept through it.

This look is inspired in part by this picture off of Pinterest.  I have planned to replicate it again however, not with shorts but trousers.