Home » General » Saying yes … a little more often
General
I tend to turn down a lot of invitations and chances for outings and actitivies because I often panick and wonder what I’m going to do with the little people.  Some things are not for them, ﻿or don’t think they’d appreciate it and another bad habit I have, which comes from having a rough time financially, is thinking at first that I won’t have enough money to do whatever the activity is.  I tend to want to pay my own way all the time and it’s taken some getting used to allowing someone else to pay as well as knowing that I can in fact afford to buy or do something.
Another area where I was living in the ‘no you can’t land’ was in clothing.  I felt so bad about my weight gain that I honestly was trying to fade into the wallpaper and be as unnoticable as possible.  When the ‘switch’ went off, that started to be worn away.  Earlier this year I bought these pants, which by all accounts by being a pear shape, I should not wear, however, they are so super slimming and unsolicited attracted many compliments and comments, so much so, I decided to get more ‘narrow/slim’ leg pants as opposed to the usual ‘bootleg’ cut I’d go for. 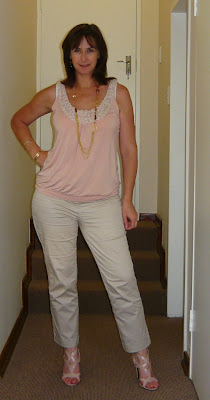 These jeans are a pair in this same style and the trousers I’m wearing today (photos we’ll take later) … I decided to say ‘yes’.  I don’t want to be ‘mutton dressed as lamb, but I think that a lot of women start reaching the big 4.0. and suddenly feel that they have to abandon all things stylish.  Sure, lets me realistic about what is too young, and I’m sure we all have something a little questionable in our wardrobes, but heck, lets not be old before our time … 40 is but a number and I truly believe that women become better with age and that edge of confidence is liberating, and most often, that confidence only kicks in after 40.
I’m loving my 40’s – I didn’t at first, but 50 is rushing at me, so I’d best enjoy this time right now, it’ll be gone too quickly and I don’t want to look back and say, I should have said yes.