Home » General » Red – two days in a row
General
Skirt, blazer & t-shirt : Truworths
Shoes : Edgars
Belt : Legit
Watch : Fossil
This was totally unintentional … and I’m going to blame the season, oh heck, I’ll be honest, by the morning I seldomly remember what I wore the day before.  Despite putting a reminder on my phone last night, I did not get my outfit ready so I had to decide this morning what I was going to wear.
I am thrilled that I finally found an OBI Belt that was not crazy expensive and fit me and that I like the colour of.  On Saturday when Courts and I were at The Glen we popped into Legit as I often find cute items for both of us there.  I first found a lovely ‘shade of blue shirt’ and as I was standing at the till I looked to my right and thre were OBI belts … I checked and luckily found the only Large on the rail and snapped it up … but the thrilling part was that both items were marked down by over 50% … S.C.O.R.E.!  The belt was all of R29.99 and the shirt was down from R129.99 to R49.99.
I was looking for something to wear the belt with and this morning as after I’d decided on the skirt and jacket I saw the red t-shirt and thought it would go great with the brown belt and brown shoes.
I’ve been thinking about creating a ‘clothing catalogue’ of my clothing so that I wear things more often.  I often forget what I have in my closet and that’s just wrong … it almost means I have way too many items of clothing.  I think I am going to make this a bit of a priority and that way I could possibly mark how often I’ve worn something and if I have a quick visual of the items in the closet will wear them more often.  Any suggestions?
Previous outings of the blazer 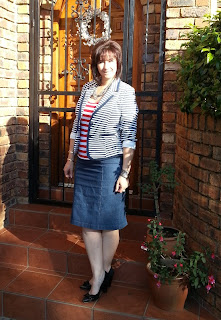 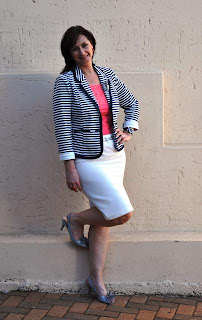 3 Comments on Red – two days in a row