Home » General » Nite out
General
Last nite we attended my nephews engagement celebration.  I ended up tying my hair up as I showered and washed it too late … about 80% of the way through styling it I realised I had run out of time.
But the dress … oooh boy, I honestly did not realise how low cut it is, but I enjoyed wearing it and I felt ueber sexy in it.  I did not take a full length picture of the outfit … but here’s an idea … it has a lovely crochet look to the top half of the back (y’all know the look, it’s so in right now) and hits just below the knees. 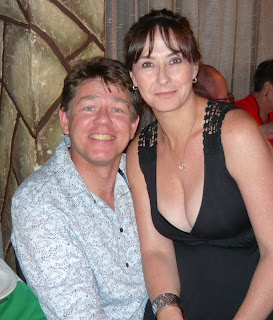 It is really, really low cut … but it’s a lovely empire waist dress, which everyone knows works wonders on the figures of pear.  I originally put on a big silver necklace, but thought I’d dress it down a little as I do think it may have brought even more attention to the boobie.  I wore my black sandals that have light sequence on them.  It looked like it may rain, so I threw on my biker jacket but took it off once we were inside.

This morning, we had an appointment to test drive a car, we ended up driving two and getting to look at another one I’m interested in, however, they did not have any demos to test drive.
I rolled up my jeans because it felt like they were scraping on the ground (it usually doesn’t bother me, but it did this morning), but really think I should not have … lol.
I also need to invest in another flat pair of sandals, but black ones as these are dark brown.
Outfit Details
T-shirt and white shirt – Pick ‘n Pay
Jeans – Edgars
Sandals – Truworths 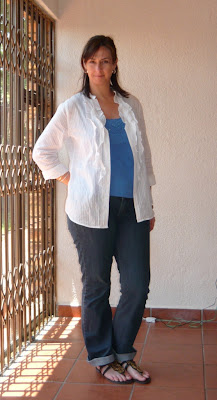 Hope you have a stylish weekend.