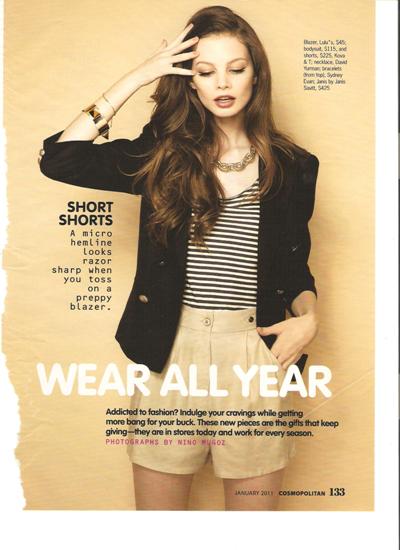 Today’s look was inspired by a photos I saw in the January 2011 Cosmopolitan magazine that Taryn brought with her on her trip over.

Although in the photoshoot the model was wearing shorts – not for me at this age – and I don’t do shorts too often,  I used a skirt instead.
The skirt was a cheapie at R89.00 from Mr. Price and today was the first time I wore it … it also creases so badly.  The t-shirt is by Daniel Hechter and the jacket from Woolworths.  Shoes are by Plum.  Necklace from Honey Accessories purchased about 15 years ago when I used to sell it part time!  It’s the most amazining pieces of costume jewellery I’ve ever bought as it has lasted remarkably well. 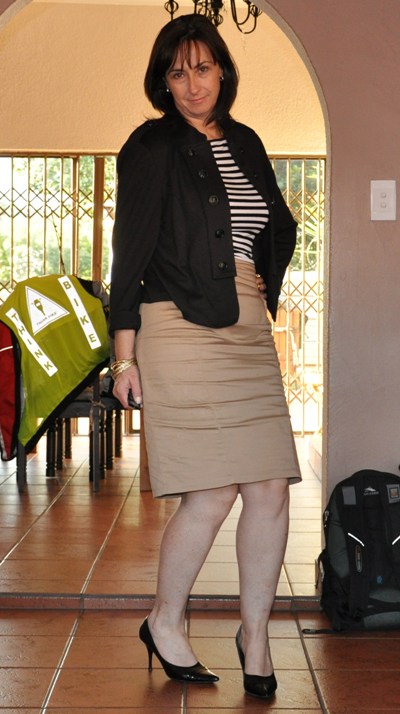 Here are pictures of my interpretation … as well as my first attempts to use the remote shutter release on my new baby … guess the crazy leg pose above tells the state of my mind … lol .. and least it doesn’t show in too great details the coffee stain in the middle of my top.

Tomorrows look will probably note be featured as I’ll be riding in the G-man due to my car needing to go in thanks to a ghastly rattle in the back door that has developed.  Wish me luck – I don’t enjoy flat flat hair :-).