Home » General » Flat shoes
General
Whenever I try on flat shoes in the stores, G-man always pulls this odd little face and says ‘nah, not sassy enough’.  So I end up not taking the shoes.  But I’ve been saying for a couple weeks, maybe months now, that I need some flat shoes for the ‘other days’ … the days where my ol’ back simply says ‘no heels today’ or when I’m going shopping on the weekend and don’t want to walk for hours in heels or visiting a craft market etc.  I am not a fan of wearing sport shoes on these days, but have done it as I have not had flats to wear.
This afternoon I went down to the store to get the usual bread and milk and had parked just in front of La Diva.  As I walked by, I thought I’d pop in and see what they had in store.  I ended up leaving with two pairs of shoes.  Courteney says I still need a black pair of flats and I do agree, but I also would like a tan pair with no patterns.
I quite like the black, white, brown and beige pair and they also had it with an orange and red, but my size was not in stock.  Since I wear a lot of earth tones though, I thought both these pairs will go great with many items in my wardrobe.  I’m now set for weekend shopping and I think I may well try these out at work as well. 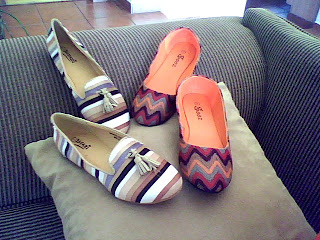 My nail colour for the week is Cafe olé by Essence, Nude Glam Nail Polish, and cost a very budget friendly R19.99.  Personall I feel that the big bottles such as Revlon has is just too much.  Before the bottle is close to a third of the way in, the polish is thick and icky and I’m bored with the colour and the next trendy new look is on the shelves and colour is out-dated.  So I’m very in favour of smaller bottles of polish. 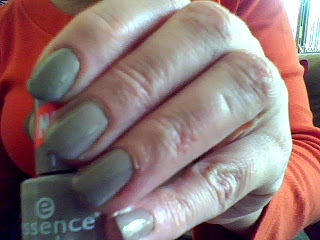 Its been a busy Sunday for me thus far, I started the day by washing down the back courtyard and putting things away and moving bins and such around.  Our little ‘walk about’ last week cemented the decision in my mind to get it done.  It’s now done and I’m pretty pleased with the results – its neat and tidy.  I just need a plant for the pot I moved to where the bin used to stand.  Two loads of laundry washed and hung up and by then my feet were freezing.  I then hit the shower, washed my hair, trimmed the tootsie nails and painted the fingers and wne to do a bit of shopping … and now I’ve spent some time sharing the details of my life, pictures of my new shoes … I’m heading up the stairs to sort out my wardrobe for the week and do a little mending and ironing/steaming.
Hope your Sunday has been fabulous.