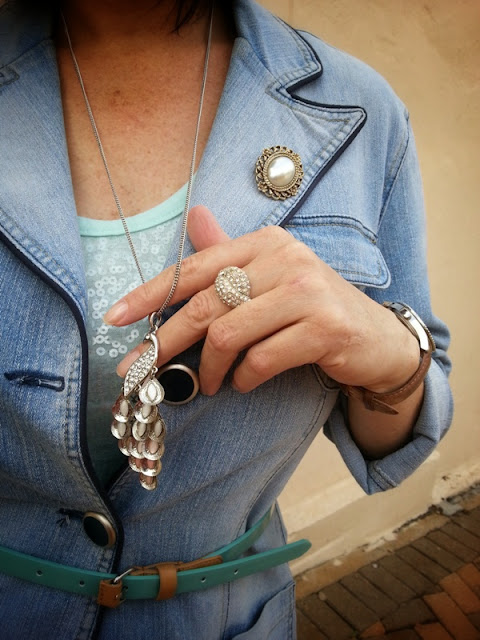 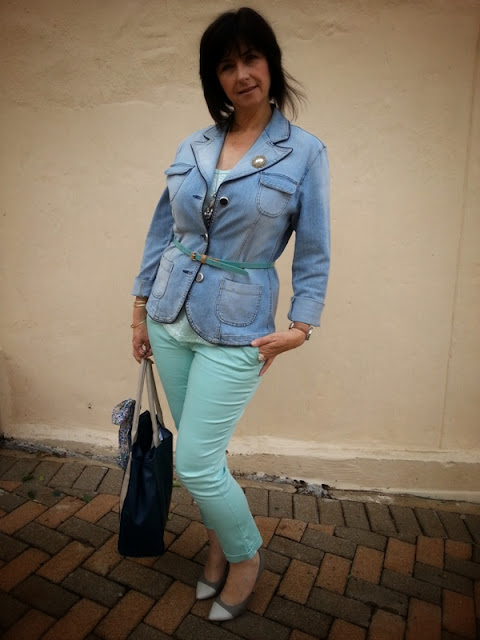 Blazer : Pick ‘n Pay | Sequin top : Mr. Price | Pants : Makro | Shoes : Rage | Shopper : Justine Cosmetics
This denim blazer is old … it was given to me by my sister Norma at least 5 years ago and I have no idea how long she had it for.  Its come in very handy.  I do wish I could get another in a similar cut but with a darker wash.  Still, for denim its soft and doesn’t sit stiff as it has a lot of stretch in the weave.
These pants are another ‘new’ to the blog item, although they’ve been hanging around my closet since around October.  They were a little too tight so I avoided wearing them (I have a nasty habit of not trying clothes on in store) and since I was uncertain about them, I left them and then it was too late to return them.  But the other day I tried them on and they fitted a little better which I think it due to the 4 pounds I’ve dropped, although they still bunch a little around the knees.  I usually prefer straight cut pants, but I had wanted this colour so snapped them up when I saw them.
The belt is a few shades darker than the pants and top and is from Woolworths.  There were a few different colour combinations of these belts and they come in packs of two for R99.00.  The other colour I bought is purple … but there were some funky neon yellows and such colours.  They didn’t quite say ‘buy me’.