Home » General » December 12 – Monday in Black
General
So, I’m fairly sure that last Monday I commented about ‘not’ wearing black on a Monday and today I go and wear black … but I added red ;-).  I woke to a real grey and miserable day here in Jozi and added to that it was real chilly – so much so that I had my heater on in my office for part of the morning – how insane is that when we’re basically in the middle of summer here in the southern hemisphere? 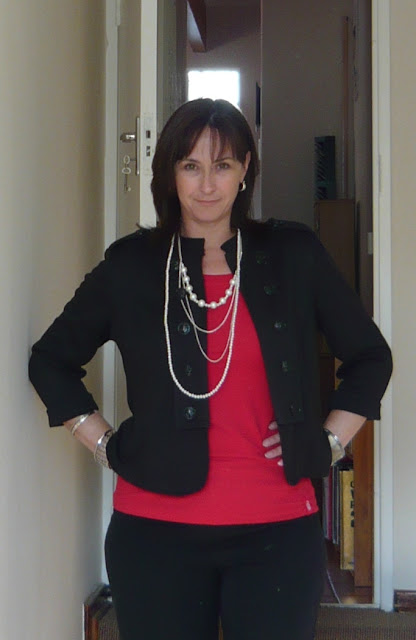 By the time I left the office after work though the sun was out in force and I was needing to shed the jacked by the time I got in the house.

Details Details Details …
The regular black pants – Finnigans at Truworths (really need to sort out my black Kelso as I’m wearing these one’s thin now)
Red t-shirt – OBR at Truworths
Jacket – Studio W at Woolworths – this is the first time I wore this since G-man bought it for me about two months ago on sale maked down by 70% – what a bargain.  I liked the military look of it and am considering changing the buttons to either gold or silver ones.
Shoes – Truworths
Necklace – hmmmm, where did I get it?  I think maybe Woolworths
Bangles – Truworths and Legit

Look at the sunshine streaming in through the window!
It’s only two days of work left, then Thursday is a public holiday and then it’s H.O.L.I.D.A.Y.  I’m like a donkey on the edge at the moment, a wee bit short tempered and irritable (don’t mention mother nature to me, I may strangle her right about now) and so ready for this break.
The little people still don’t know that we’re heading to the coast, but I have a sneaky feeling that they’re suspicious … I just hope they like the surprise.

4 Comments on December 12 – Monday in Black